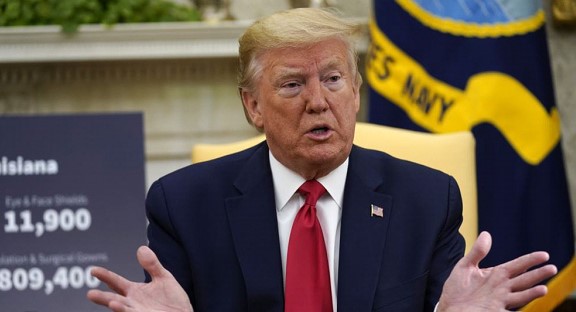 The President said that Beijing should have been more active in spreading information about the coronavirus.

President Donald Trump believes that China’s actions in the coronavirus situation are proof that Beijing will “do everything possible” to make it lose the election in November.

In an interview with Reuters in the Oval Office, Trump said that he was considering various options in terms of the consequences for China due to the virus.

Trump blames China for a global pandemic that, according to Reuters, has killed at least 60,000 people in the United States and plunged the country into a deep recession, jeopardizing his re-election hopes.

The Republican President, who is often accused of belatedly preparing the US for the spread of the infection, said that China should have actively informed the world about the coronavirus so that it would become known much sooner.

When asked whether he was considering imposing tariffs on China, Trump did not go into detail. “There’s a lot I can do”, he said. “We’re trying to establish what happened”. “China will do everything possible to make sure that I lose the election”, Trump added.

According to him, Beijing wants its opponent, Democrat Joe Biden, to be the winner so that he will ease the pressure that Trump is exerting on China on trade and other issues.

Trump also said that South Korea agreed to increase payments to the United States as part of the defense cooperation agreement, but did not specify by how much. Meanwhile, on Wednesday, Trump again advocated “opening up” the country.

He rejected the idea of a “new normal” in America, saying that “it is going away”. “I want to go back to where we were before”, he said.

The White House’s recommendations on social distancing expire on Thursday, and Trump told reporters that they would probably “gradually go away”. Meanwhile, Vice President Mike Pence said that a significant portion of them are included in recommendations for States to restart public and economic life.