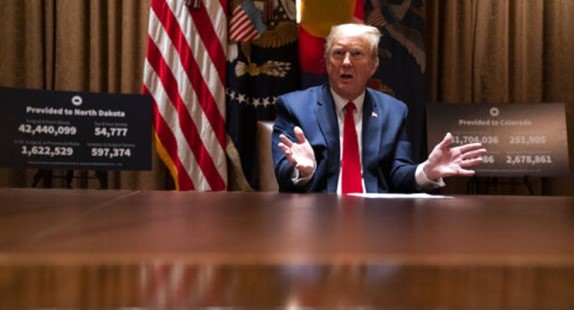 The President believes that China could stop the spread of infection.

US President Donald Trump on Thursday said that he was very disappointed with China’s actions in the situation with the coronavirus, and made it clear that the pandemic cast a shadow over the trade agreement between the two countries.

The coronavirus outbreak began in the Chinese city of Wuhan in December. It continued to spread, while Washington and Beijing signed the first phase of a trade agreement, which President Trump called a significant achievement.

“I am very disappointed in China”, the President said in an interview that aired Thursday on the Fox Business Network.

“They shouldn’t have allowed it. I made a great agreement, and now, I admit, I feel differently about it. I have not had time to dry the ink as the plague came. And now it feels different”, he said.

Under an agreement signed in January, Beijing pledged to buy at least $ 200 billion worth of additional goods and services from the United States over two years, and Washington agreed to phase out duties on Chinese goods.

According to a Chinese state newspaper, some government advisers are calling for new negotiations and possibly a reset of the agreement.

Trump again stressed that he is not interested in new negotiations.

While US intelligence agencies concluded that the virus was not created by humans or genetically modified, Secretary of state Mike Pompeo in early May said there was “significant evidence” that the virus originated from a laboratory in Wuhan.

On April 30, Trump expressed confidence that the virus could have originated in a Chinese laboratory.

In an interview with Fox Business that was recorded on Wednesday, Trump paid more attention to China’s response to the epidemic than to the origin of the virus. “We have a lot of information, and it is unpleasant. Whether it came from the lab or bats, it all came from China, and he had to stop it. They could have stopped it, at the source”, he added. “The Situation got out of control”.